11 Best CSS Frameworks to Use for Web Development 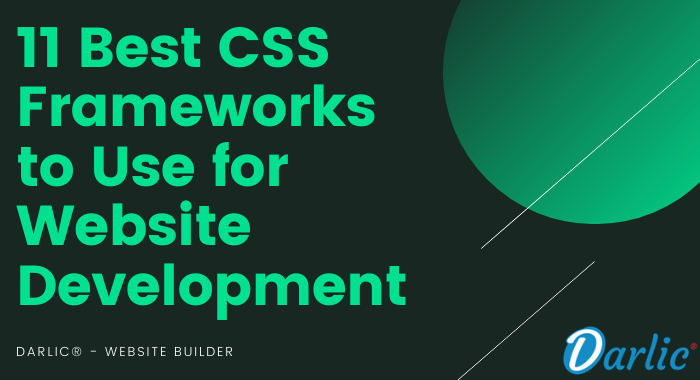 The CSS frameworks are gaining a lot of popularity in recent days. And it is even more difficult to imagine a website without the use of CSS frameworks. With advanced development, the CSS frameworks have come up with advanced tools and revolutions. Â The basic concept behind CSS is to describe HTML as a structural format. And is a format that even provides the style and design of the structure. It has even become oneof the major components in all sorts of web development and web creations.

In simple words, the CSS can be described as the style and the design of a particular website that definitely makes it more unique. In fact, there are wide varieties of CSS frames available for web developers so that they can utilize them in a more advanced way. Each and every CSS frame has its own specialty and designing capabilities. One of the main reasons why they have become popular is due to the easy accessibility and user-friendly interface.

You will never find any website without the implementation of CSS or either CSS frameworks. It not only benefits the developers but also saves a lot of time while designing any website. They also have built-in facilities along with a mobile-friendly interface. Some of the CSS frameworks are given below so that you will have a basic idea of them.

Bootstrap is one of the most popularly used CSS frameworks by web developers. It is too good to be true that Bootstrap has a greater standardized platform. Along with the implementation of unique style patterns, it also has the most desired components in it. The Framework is easily supported in any type of browser and easily supports any sort of issue. The excellent user interface makes everyone to be found about it. The Framework is easily available for mobile users as well.

This is most popularly known for its lightweight version. This is the main reason why most of the developers choose UIkit while developing their website. Additionally, it is also known for its modularity that is well organized. With the different varieties of styles available in the CSS Framework, it provides different options for the users. The customized, as well as build-in animations, make the framework to be unique and outstanding. All these features made it be one of the most flexible frameworks.

You may also like to read:- Top 12 PHP Frameworks for Developers To Use

A well-known CSS framework for Its easy user interface. Semantic UI also provides developers with a vast range of customized options. The CSS Framework resembles Bootstrap that is officially supported by some of the external libraries like WordPress and angular. The main Principle behind the Semantic UI is to tag ambivalence, semantic, and responsive. And is considered as an excellent framework to build any platforms.

Pure is a simple CSS framework that is optimized and modular as well.Being a lightweight CSS frame it also provides a flexible variety of CSS modulus. It is an Ultimate CSS Framework, which cannot be replaced by any other. The amazing features include menu grids, responsive buttons and so on. It is completely based on CSS, which does not support any other extensions.

Being one of the lightweight versions it is also well known for its responsive frame building factors. The basic HTML can be easily supported by The Skeleton CSS framework. Ultimately, it provides a large number of templates and is badly designed for the developers concerning the purity of CSS frameworks. It can easily organize the file structure and the basic concerned to provide user interface configurations.

An ultra-modern CSS framework that is even easier to understand for the new users. Recently it has gained popularity due to its multiple designing skills and developing communities. And is also one of the lightweight version that has customized options for the developers.Bulma is available with an integrated flexbox so that the users can design in a more fancy way. The features are not much interesting, but still, it has been used by many people.

It is one of the free CSS Framework that is used to create websites as well as web applications.Cascade CSS Framework is similar to that of bootstrap and foundation frameworks. The basic concept behind cascade is that it contains the wide range of HTML and CSS based interfaces. JavaScript is an exclusive extension available in cascade CSS framework. The supportive feature of the Framework in provided with responsive design.

This is a Framework that is mainly used for practical use cases. The Framework is available with small footprints as well as compatible. A lightweight and style oriented Framework that is specially designed for professional web developers. It is a mobile-first and full responsive grid system that is easily adapted for mobile devices.